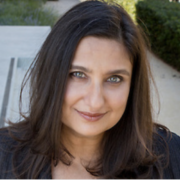 Dr. Chander is a physician, neuroscientist, and futurist who trained at Harvard, UCSF, UCSD, and the Salk Institute. She is Chair of Neuroscience and Faculty of Medicine at Singularity University, Visiting Scholar in Medicine (Bioinformatics) at Stanford (where she was on the Anesthesiology faculty for 8 years), and Senior Fellow at the Atlantic Council GeoTech Center. Her postdoctoral research allowed her to use light-activated ion channels inserted in DNA (optogenetics) to study sleep and consciousness switches in brains. Her goal is to understand neural mechanisms of consciousness, the evolution of human consciousness secondary to human augmentation, and how mapping consciousness in humans may help us to understand consciousness and intelligence in other life forms (e.g. animals, non-terrestrials).

During the Covid19 crisis, she now leads or advises 3 pandemic task forces, including One Shared World’s Global Pandemic Resilience Task Force, a NASA-White House Telehealth task force, and a re-open strategy for the state of California. In response to the need for global resilience, she cofounded Plexxus, a company building the world’s connected global immune system. She is also founder and CEO of lucidify, a tele-neuroICU platform, backed by AI, to map and diagnose brain dysfunction in patients.

Dr. Chander also contributes to space life sciences and medicine. A finalist for astronaut selection and an alumnus of the International Space University, Dr. Chander has performed remote simulations of trauma rescues, anesthesia and surgery in Mars analogue settings with physicians in the US, France, and the Concordia base in Antarctica. She has also been involved with a consortium that elaborated a road-map for studying the effect of microgravity and radiation on the nervous system, cardiovascular system, cognition and sleep. She wishes someday to see the Earth rise from the surface of the moon.

The start of 2020 bore witness to the genesis of a worldwide pandemic, involving the exponential spread of SARS-CoV-2, better known as COVID-19. The burden of disease, and the death toll, disproportionately fell to vulnerable people all over the world – both medically vulnerable, and socioeconomically vulnerable, exposing fault lines in the system. The international bodies typically tasked with disease threat assessment and protecting human health were significantly under-resourced (funding, staff, R&D) to perform their duties. As a global society, we can, and we must do better. This talk re-imagines an agile, responsive global health infrastructure to serve the cause of pandemic resilience, and proposes a roadmap to both emergently respond to the current pandemic, and restructure global health to respond to and prevent future pandemics. It is also a call to action to build or fund various parts of this infrastructure.

Understanding consciousness has been one of the grandest endeavors for humankind, but despite all we have learned about the brain through mapping, we have not truly been able to define what consciousness is. In this talk, we explore how to measure consciousness, new ways to define it, and even new theories for understanding its origins. In addition, the connection to animal consciousness and potentially exploring the universe for extra-terrestrial intelligence (SETI) is explored. Fundamentally, understanding this question is about defining who we are.

The genetic code and the neural code, the two fundamental codes of life, are being rapidly digitized, through revolutions in gene sequencing and brain mapping. By dissecting the codes of life, we are newly empowered to repair and rebuild humans. But we might also be able to create humans to be something beyond our state of evolution? And how does the ability to read-write to humans make us uniquely vulnerable to being hacked? Human augmentation and other technologies are blurring the lines of what it means to be human.

Brain mapping and digitization has opened up new opportunities to writing to the brain, and augmenting it through connection to machines. We tour the amazing advances in digitization and bionic evolution that have the power to expand human cognition, human potential, and potentially change the landscape of human consciousness.

Medicine is being transformed by exponential technologies that often are developed in the non-healthcare space. But more important than healthcare is re-imagining the extension of our lifespans as vibrant health spans. We explore health tech and medicine through the lens of longevity – how accelerating curves and exponential technologies like 3D printing, robotics, artificial intelligence, stem cells, augmented and virtual reality, microfluidics, nanotechnology, and brain machine interfaces move us closer to our goal of longevity – the elimination of chronic disease. New diagnostics, therapies, and even augmentation are considered, as well as their ethical implications. How do these advances impact economics? Growth? Politics? Human evolution? Be prepared to be excited, stimulated, and even conflicted about the future of medicine and humanity as we enter the new era of exponential biology.

Longevity & the Future of Health

The science to delay, arrest, or reverse human aging is making exponential strides. How will we get there? What does that future look like? Will it be democratized? Will it be accepted? In this talk, which verges on science fiction made reality, we’ll explore what science tells us about living longer, what we are doing to realize this goal (e.g. technologies like CRISPR, brain machine interfaces, human augmentation), and how this will affect the psychology and future of the human species. But longevity is not just a healthcare issue – extending human lifespans to even 120 or 130 years will affect every industry, every vertical, and have a massive impact on adjacent technologies and global markets. Longevity affects all stakeholders. It also comes with risk and responsibility. Ultimately, understanding human longevity becomes a journey to understanding where our species’ destiny lies.