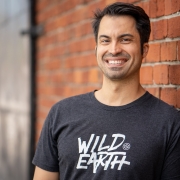 Ryan is a co-founder and CEO at Wild Earth, the leading healthy, plant based dog food company in the US and brings years of experience in leading, building and advising high-growth food and biotechnology companies. Ryan is also a Partner at Babel Ventures, silicon valley based biotech VC firm and a faculty member at Singularity University, focused on harnessing biology as a technology to solve some of our world’s most intractable problems.

Ryan was previously co-founder, former Program Director, and Venture Partner at IndieBio and has invested in over 110+ early stage biotech, food and technology startups as an Angel and Venture Capital Pre-seed and Seed investor (usually cutting the first check) with a combined market value of over $3 Billion. He was previously head of life sciences at the XPRIZE Foundation and spent a decade developing human therapeutic with large companies like Pfizer, Merck, Amgen, Genentech. His work at the interface of science and business has been covered globally.

Ryan has a BSc degree in Biological Sciences (Molecular Genetics) from Warwick University, a joint Masters in Bioscience Enterprise (MBE) from Cambridge University and MIT. He’s also been a Doctor of Philosophy (PhD) Candidate at the Center for Regenerative Medicine at the University of Edinburgh before pivoting to build startups.