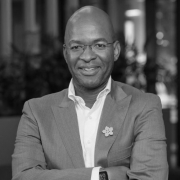 Phathizwe Malinga strongly believes that transformation is essential for South Africa’s future success and it will create opportunities for businesses, small and large, to come up with innovative solutions. He has been in Software Development, mainly as a project manager and head, for almost 20 years. As the Managing Director of SqwidNet, he is responsible for building an IoT connectivity business in South Africa, developing the business strategy and overseeing the connected devices solutions divisions, in partnership with International IoT giant SIGFOX. Despite being a new start-up, they are focussed on providing South Africa’s first nationwide low-cost IoT network and have already covered over 90% of South Africa’s population.

As part of the SingularityU South Africa faculty Phathizwe focuses on IoT, ICT, Big Data and the power of smartphones and how these exponential technologies can help solve some of Africa’s grand challenges. He coined the phrase, “IoT is as simple as ABCD”, Applications + Backend Platform + Connectivity + Device.

Phathizwe has been involved in the information technology and telecommunication industries for over two decades and has held several senior management level positions. As the Managing Director of SqwidNet, a fully-owned subsidiary of Dark Fibre Africa, Phathizwe is responsible for building an IoT connectivity business in South Africa in partnership with International IoT giant SIGFOX. He is no stranger to the role of a strategist, as he has also consulted with Max Healthcare and worked for the Life Healthcare Hospital Group.

He completed his Executive MBA from the Graduate School of Business, Cape Town. He guest lectures at the University of Cape Town and sits on the board of Bizmod Consulting. Always inspired to pass on his knowledge and personal experiences, he believes in mentoring in the work, elbow deep, immersed in complexity, and this is why he also works with MBA students at the Gibbs School of Business in Johannesburg.

TechFriday: Is it time to rename mobile phones? (IOL)