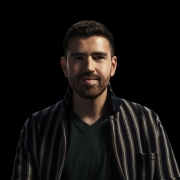 Arturo is the founder & CEO of Clara Foods, a leading molecular food company based in Silicon Valley making real animal protein without the use of a single animal protein––starting with the world’s first animal-free egg white. Clara leverages synthetic biology and advanced fermentation to brew proteins that have the taste and nutrition of animal proteins but with a smaller footprint on our planet.

Arturo has been named as the National Hispanic Institute’s Person of the Year, Forbes 30 Under 30, and GreenBiz 30 Under 30 sustainability leaders. He holds a degree in Government from Harvard University.

Future of Food: Protein without Animals, Eggs Without Chickens

With population expected to reach almost 10 billion people by 2050, our world will need to engineer new ways of growing food––especially animal protein. Animal protein production today accounts for 75% of all land used for agriculture, emits more GHGs than the entire transportation sector (all the cars, planes, ships in the world combined) and is the leading causes for biodiversity loss and species going extinct. In his talk, Arturo discusses the different technologies being actively developed to solve this problem and uses the company he founded, Clara Foods, which is making the world’s first animal-free egg white, as a case study to bring these examples to life.