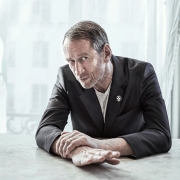 Per Holknekt is one of Sweden’s top rated and most popular speakers. The stories and teachings from his roller coaster life are very compelling, and it is his huge variety archive of experience that makes him unique.

Per is a very well-known Swedish entrepreneur and the founder of several companies, the most successful being the clothing company Odd Molly. A very engaging speaker, he tells the stories of both high and low points in his life and his story is truly motivating.

Per grew up in Dalarna, Sweden. His father was a police officer and his mother a school principal. In the 1980’s he moved to Hermosa Beach, California, where he was a professional skateboarder, winning several international competitions. While in California, Per founded the skateboarding magazine Transworld Skateboarding. He returned to Sweden and studied economics, and then started the skateboard company Street Style with his brother Thomas. Later, he went on to found another skateboard company, Svea, which launched a skateboard brand and a clothing label.

Per suffered from alcoholism, and went through a life crisis. He lost everything and became homeless, supporting himself by selling the Stockholm street newspaper Situation Sthlm. He sought treatment for his addiction and eventually regained sobriety. After four months of being sober he was a housemate on the first season of the Swedish Big Brother series, in which he finished in second place, voted off on the last day.

In 2002 Per started working with fashion designer Karin Jimfelt-Ghatan, and together they created the international clothing company Odd Molly and became “Founders of the Year” in 2010 at Sweden’s annual entrepreneurial gala Entreprenörsgalan. In 2013 Per left Odd Molly to work as a branding consultant for various companies.

Other ventures include launching a magazine, hosting a radio show in Sweden and writing his autobiography Per Holknekt 1960–2014, co-written by Markus Lutteman. Per is also a successful pinball player, and has participated in national, European, and world championships hosted by the Professional and Amateur Pinball Association.

Per is fun, motivational, moving, and a fantastic speaker to leave the audience inspired and raring to go.

Per Holknekt has started 39 companies so far, one went public, valued at SEK 1,000,000,000. He has also been homeless and lost both family and work to alcoholism. Per has a unique ability to transform ashes into fire. Grateful for what life has given him, he shares his failures, but also his success, noted with awards such as Founder of the Year, Export Business of the Year, Inspirer of the Year, and many more. With his deep knowledge and experience in brand building, strategy, and entrepreneurship, Per shares inspiration, laughter and tears, but also valuable keys, lessons, insights and methods that are easily applied to anyone and anything.

Are you dreaming of your own company, or wishing to realize and develop some big ideas? Perhaps you just want to be inspired and grow as a person? This talk covers Per Holknekt’s latest book, The Moneyfest, which gives constructive and bold advice packaged in sensible madness. It offers courage, new insights, and tools for individuals and entrepreneurs to use in daily life or daily operations, no matter what your role. The Moneyfest challenges old traditions, breaks protocol, and turns tired business models on their heads, so you can rebuild and build new. All considering the new market conditions created by the 4th industrial revolution. With faith and passion anyone can create miracles.

A unique and new talk/workshop package concept created by Per Holknekt, together with Profile Agency. Start with a 30 min inspirational talk (digital or live). The talk will end with Per posing various questions specifically related to your organization. Each participant gets a signed copy of The Moneyfest. A month later we meet again and work on those same questions, relating to your organization, your challenges, or your vision.