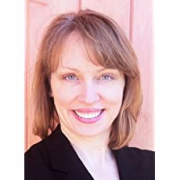 Melba Kurman writes and speaks about exponential technologies and how they affect us. She is the co-author of two award-winning books, one on 3D printing (Wiley) and the other on driverless cars (MIT Press). She has been interviewed on NPR and Politico, and her work appears in various media outlets, including Popular Mechanics, Forbes Middle East and VentureBeat.

In the past, Melba worked at Microsoft and Cornell. She was educated at Cornell University and the University of Illinois’s I-School. Melba was born in Helsinki, and is a proud first-generation American-Estonian.

Smarter Cities of the Future

Exponential technologies are having a profound effect on how cities function. Today’s urban areas are built of concrete and steel. Tomorrow’s cities will be defined by data — dense, fast-moving clouds of data from networked sensors, driverless cars, surveillance cameras and people’s smartphones. Some of this data will be owned by the city government. However, most of it will be created and controlled by the private sector, companies like Waymo, Uber, Apple and others. This talk gives a big picture introduction to the emerging world of smart cities, including who the players will be, and what enabling technologies they will rely on. We look at best-practice cities such as Barcelona and Chicago that are improving local governance using innovative solutions like public data trusts and open APIs. We delve into the growing impact of the private sector in smart cities, and explore emerging business models
being built around data collected in urban public spaces. Every region has its own destiny, and no two smart cities will be alike. This talk aims to empower diverse participants with the practical insights and future vision they need to shape their own unique strategies.

Cities are our future but most cities today are frozen in time, using “Smart City” technology to automate old ways of doing things. The good news is that this is changing. Exponential technologies have already transformed industry. In the coming decades, we will see bold and creative cities use exponential technologies to solve global challenges and to create healthy and prosperous citizens. This session explores our urban future, one made possible by improvements in sensors, machine-learning, and driverless vehicles. In the Exponential City, driverless vehicles will shrink traffic and change commerce. Exponential Cities will transform polluting urban sprawl into green, high-density downtowns full of responsive buildings that generate their own energy. In the Exponential City, citizens will use abundant video data, sensors and machine-learning to become healthier and to launch new “urban tech” business models. Since cities contain so many different dimensions, clients may request that this session can be customized to hone in on a particular facet of the Exponential City – for example sustainability, transportation, or the commercial opportunities in the growing urban tech sector.

Driverless cars are already on the road. Taxis guided by artificial intelligence and sensors are driving public roads in several cities around the world. In China, autonomous delivery pods the size of refrigerators deliver goods to consumers, and more countries will follow. To thrive in our driverless future, it’s important to understand the basics today. This talk provides an introduction to autonomous vehicles: how the enabling software and hardware work, the risks of intelligent vehicles, the potential new business models they enable, and their impact on established industries. We explore why automotive and technology companies are in a heated race to carve out their turf in the future market for software, hardware and services. We look at the role of driverless cars in future smart cities, and analyze their effect on traffic congestion and air quality, urban landscapes and mass transit. No matter what industry you work in or where you live, your life and business will be impacted by autonomous vehicles. Melba Kurman provides an engaging roadmap of our future when exponential technologies transform cars into intelligent, data-driven transportation robots.

Driverless (MIT Press): Intelligent Cars and the Road Ahead (The MIT Press)
Fabricated: The New World of 3D Printing
Tech Transfer 2.0: how universities can unlock their patent portfolios and create more startups