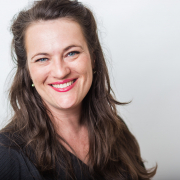 Jody creates superhumans, not supercomputers. Rather than teaching humans the right buttons to push, she uses cognitive computing (AI, AR/VR, robotics, sensors, etc) to make tech understand humans. The resulting tools dramatically extend, augment, and amplify human abilities and are as easy to control as our own bodies. She might read too much Batman but in her 23-year design career, Jody has created just about everything from AI and holograms to robots and R&D. Her most notable work includes UX design for DARPA’S Big Dog, Principal Experience Designer on the HoloLens Project at Microsoft, HMI for Toyota’s AiCar, and Director of Design for Singularity University Labs.

Today, she is a Principal Design Researcher in Microsoft’s Office of the CTO, working to define the future of human-machine interface (HMI) through radical inclusion by leveraging brain-machine interface, sensors, robotics, AI, and AR/VR. She travels around the world speaking about the future of these technologies and their impact on humanity for Singularity University, The Atlantic Council, WIRED, Google, and TEDx.

If technologies are evolving exponentially, and the rate of change is accelerating, how do you create innovations that keep you ahead of the curves instead of disrupted? The design team at Singularity University has developed their own special brand of design thinking to help you do just that. Jody will explain how linear thinking produces incremental innovation, and introduce the D4X framework designed to generate moonshot innovation through Impact, Science Fiction, and Prototyping.