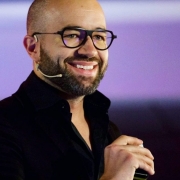 An expert and enthusiast of artificial intelligence, Adam fills his time doing keynote talks, researching, creating unique business ideas and developing technological platforms – all of which revolve around healthcare, biotechnology and automation. Adam can be found on his laptop in coffee shops, lecturing medicine or engineering to hundreds of students, or providing new ideas in the world of technology and business. Using his experience in engineering, software and entrepreneurship, his areas of expertise are focused on artificial intelligence, ethics, biotechnology, engineering and robotics. With 10 years of experience, Adam has and continues to use his skills as a technologist to disrupt and innovate in industry and think about change.

His impact has been featured in publications such as Forbes, Ozy, Futurism, together with producing an abundance of academic journals and patents. Adam’s work and projects have been re-released in hundreds of languages, making him a global phenomenon, with the worldwide interest piece “Brainternet”. Carte Blanche, Mail & Guardian, Man Magazine, and many other media platforms have spotlighted and captured his projects. This has all brought to light that which Adam continues to do for society: some other projects include an eye-controlled wheel chair; a non-cognitive brain transmission channel using light; a thought-controlled robotic arm with a light-invoked on/off switch; a hands-free controlled surgery interaction system; a CPR monitoring system; a computer-based sign language interpreter; and an eye- controlled cursor using the vestibulo-ocular reflex. Adam’s projects continue to grow in complexity, benefit and social impact.

Adam is the co-founder of multiple startups such as AURA a mobile security app, Tariffic a platform to best predict a customer’s preferred mobile plan, Resolute Robotics an online education forum to promote engineering and robotics , and think3dots a start-up focused on biotechnology, AI and engineering. Adam acted as CTO of VATIT, the world’s largest VAT Reclaim business (2015 – 2017). He also consulted extensively to three of South Africa’s major banks, on matters at the junction of technology and business.

Adam’s own personal journey allowed for him to engineer his way around certain challenges, leading him on a most successful path. From a young age Adam has pursued the act of deconstructing technology in order to build a better and brighter future. In his quest to combine industry and academia, he continues to focus on the future, on technological innovation, and on education throughout.

In this talk, we focus on the way that we are connecting up tech and us. Adam has been fascinated for a long time with how humanity and technology are interwoven and becoming more so, and this has informed a lot of his research work. In this talk, Adam looks at human perception. He then covers a small segment on his personal motivation, which makes the human side “more human”.

Following this, there are some practical videos/examples of his research & trajectory in this space, specifically focussing on some of the prototypes he and his teams have worked on. These prototypes show the ability to use the “hacker mindset” for frugal innovation in constrained environments. We then project into the more slightly philosophical future of potential human machine convergence. This talk leaves the audience feeling excited about the potential for this space and for their own potential prototyping. It also hopefully instils a sense of urgency around action in terms of how quickly things are actually changing, and how we as humankind have a major and active role to play in our own trajectory.

Why Tomorrow’s Complexity is Today’s Agenda

Ethical Considerations in a New World

Automation and Productivity for the Humans