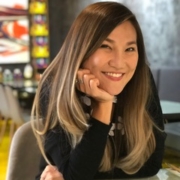 Dr Loretta Chen is an award-winning creative director, The Straits Times Singapore bestselling author of Woman on Top : The Art of Smashing Stereotypes and Breaking All the Rules, Driven By Purpose, Destined for Change, Madonnas and Mavericks: Power Women in Singapore and Inspiring Women of Hawaii. She is now completing M/OTHER for The Straits Times Press.

Hailed as “a force of nature”, “rebel with a cause”, “power woman” and “Asia’s Anna Wintour and Most Inspiring Women”, Loretta made her mark as an arts and cultural icon with her daring and provocative theatrical productions such as The Vagina Monologues and What the Butler Saw. She also helmed Victor Victoria, starring jazz legend, Laura Fygi when President Obama visited Singapore for APEC 2009. Her recent film, Secrets to Happiness won numerous awards in the international film circuit.

An experienced presenter, she has helmed her eponymous radio show on Lush 99.5, hosted the World Cities Summit with global leaders as well as ministerial forums with heads of state. She is also a sought-after keynote and has spoken at the statewide conference for the Association of College and Technical Education (ACTE), Singapore Management University, Stanford University and is leading this year’s International Women’s Day festivities for YARA, a publicly listed company. She will also be a featured speaker in SXSW held in Austin, Texas come March 2022.

Her integrated media agency, The Activation Group, co-founded with her brother had over 150 staff at its peak and counts Samsung, Louis Vuitton, Nike, Absolut Vodka and World Wide Fund as some of her key clients before she exited to pursue her dream in Hawaii. Loretta returned to her first love, higher education and is now a leadership, branding and theater professor at University of Hawaii and Ritsumeikan Asia Pacific University.

A committed social entrepreneur, she incorporated Catalyst for Good to provide for traditionally underserved communities and sits on the board of Hawaii Technology Academy, Manoa Valley Theater and was inducted into the Patsy Mink Center for Business Leadership. In 2021, she co-founded Smobler Studios, a virtual architecture firm and has a front row seat in the creator economy, Web 3.0, NFTs and the ever-evolving metaverse.

Loretta’s personal tagline is People, Purpose, Possibilities. She is on mission to use her 24 years of hard-won, diverse experience to educate and accelerate the next generation of leaders, entrepreneurs and changemakers. She is also a doting mom to seventeen fur babies.