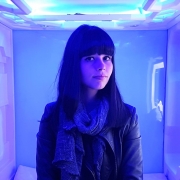 Lidia Zuin is a journalist, researcher in futurology, professor at Istituto Europeo di Design, and speaker. She holds a MA in Semiotics and is currently a PhD candidate in Arts. She publishes a quarterly column at UOL and a monthly article for the website O Futuro das Coisas, in which she explores themes such as culture, technology, arts, and science fiction. Lidia has presented two TEDx talks in Brazil, one about science fiction and technological innovation, the other about transhumanism and the future of our species.

As a science fiction writer, Lidia has been publishing short stories since 2010. In 2019, she organized a collection of short stories under the title “2084: Mundos Cyberpunks”. As a freelance researcher at Envisioning, she took part in projects commissioned by clients such as ArmaSuisse, BNP Paribas, and Oxiteno. Her deliveries include the creation of interactive, gamified narratives, and emerging technologies forecast.

As Senior Foresight Researcher & Chair of Center for Science Fiction at the Disruptive Futures Institute, she proposes the use of methodologies such as design fiction, as well as discussions on the ethics of technology through the creation of future scenarios. In partnership with speaker, futurist and consultant Roger Spitz, she has been working on a project on disruption and futurology. Together, they presented a glimpse of this on-going research during UNESCO’s Futures Literacy Summit in 2020.

Since 2016, Lidia has been hosting corporate talks and workshops, as well as trends research for clients such as Itaú, Bradesco, Globo, Alelo, Raízen, Pirelli, Porto Seguro, Embraer and more. She has also experience in the game industry. In 2015, she worked for Rockstar Games as a localization game tester and contributed to the websites KillScreen and Versions with articles about virtual reality, technology, videogames, and science fiction.

As an academic researcher, Lidia has authored three monographs on science fiction, cyberculture, arts, and semiotics. She presented her research “Kunst ist Krieg” at University of Vienna during a Summer School in 2011. She has papers published in both academic journals and books. As a pastime, she likes to paint, play video games, and read.

Presentation of the field of futures studies, explanation of the several disciplines and how science fiction, in spite of being an artistic genre, also serves as a methodological approach to envision the future and speculate technologies.

The origins of the transhumanist movement, the main thinkers and theories, and the projects that aim to extend human life radically.

The future of immersive technologies

From science fiction to science fact, how the developments in immersive technologies are opening the path to the creation of a new reality. From headsets to mixed reality lenses and haptics, what are the most innovative gadgets, games and simulations that are not only revamping the entertainment industry but ultimately allowing us to expand our sense of identity and embodiment.

Cyborgism, biohacking and the future of the human species

Subcultures that are exploring means to enhance the human body and ultimately revolutionize humanity as a species to be blended with machines. What is technological singularity and what is the concept of Novacene posed by James Lovelock. How cyborgism breaks the norm of gender identity and may emancipate us from stereotypes (after Donna Haraway).

“My art is not an answer, it is a question”. Uma análise do impacto das imagens de Gottfried Helnwein a partir dos casos da aquarela Life Not Worth Living e da instalação Selektion (Ninth November Night)