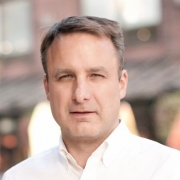 Dr. Jonathan Foley is a renowned climate scientist, sustainability expert, educator, and public speaker. He is also executive director of Project Drawdown — the world’s leading resource for climate solutions. His work focuses on finding solutions to sustain the climate, ecosystems, and natural resources we all depend on.

Foley’s work has led him to become a trusted advisor to governments, foundations, non-profits, and business leaders around the world. He and his colleagues have made major contributions to our understanding of climate change, ecosystems, and the sustainability of the world’s resources. He has published over 130 peer-reviewed scientific articles, including many highly cited works in Nature and Science. He is among the top 1 percent most-cited scientists in the world.

A noted science communicator, his presentations have been featured at hundreds of venues, including the Aspen Institute, the World Bank, the National Geographic Society, the Chautauqua Institution, the Commonwealth Club, the National Science March, and TED.com. He has also written many popular pieces in National Geographic, the New York Times, the Guardian, and Scientific American. He has appeared on National Public Radio, the PBS NewsHour, the BBC, CNN, and in the New York Times, the Guardian, the Washington Post, WIRED, the HBO documentary “Too Hot Not to Handle”, and the film series“Let Science Speak”.

Foley has won numerous awards and honors, including the Presidential Early Career Award for Scientists and Engineers, awarded by President Clinton; the J.S. McDonnell Foundation’s 21st Century Science Award; an Aldo Leopold Leadership Fellowship; the Sustainability Science Award from the Ecological Society of America; and the National Science Foundation’s Faculty Early Career Development Award. In 2014, he was named as the winner of the prestigious Heinz Award for the Environment.

Before joining Project Drawdown, Foley led a number of environmental science and sustainability organizations. At the University of Wisconsin, he launched the Center for Sustainability and the Global Environment (SAGE)and served as the first Gaylord Nelson Professor of Environmental Studies. He was also the founding director of the Institute on the Environment (IonE) at the University of Minnesota, where he was the McKnight Presidential Chair of Sustainability. More recently, he served as the Executive Director of the California Academy of Sciences, the greenest science museum on the planet.

The news on climate change is grim. But what if there was a practical plan, based on the latest science, that could turn it around, and help us build a climate-safe future?

That’s what Project Drawdown is all about. Drawdown is a multi-faceted set of solutions – focused on fixing the world’s energy, food, and material systems – that can help us stop climate change and pivot to a better, more sustainable world.

Drawdown highlights over 100 solutions to climate change — from electricity, food & agriculture, industry, transportation, buildings, restoring forests, and protecting our oceans. It is the most comprehensive plan to address climate change ever created, and is told in a beautiful, accessible, and compelling way. Far from the “doom and gloom” tone of most climate change discussions, Project Drawdown focuses on opportunity, action, and empowerment.

Rich with the latest insights from science, emerging solutions from every part of the globe, powerfully motivating stories of hope, and beautiful images and multi-media, this presentation speaks to many different audiences. Different versions of this presentation can engage influencer groups (focused on climate solutions that businesses, governments, and international nonprofits can achieve) and general public audiences (showcasing what everyday people and communities can do to help address climate change).

The presentation draws from Foley’s extensive experience in climate change and sustainability solutions, and the work of Project Drawdown, including their New York Times best-selling book, Drawdown.

The world’s food system faces enormous challenges. First, even as we grow enough food to feed everyone today, nearly 800 million people still go hungry because of crushing poverty and failed institutions. Second, as the world’s population, affluence, and appetite for rich foods increases, the current food system may face major challenges in meeting these demands. Finally, the current food system is completely unsustainable, and is a major driver of global environmental problems – including climate change, tropical deforestation, biodiversity loss, water depletion, and pollution. We have to do better.

In this presentation, Foley outlines a 5-part solution to fixing the global food system, showcasing new ways to feed our growing world while protecting Earth’s natural environment for future generations. Based on cutting-edge science – led by Foley and featured in the world’s leading scientific journals and media outlets, including TED, Scientific American, and the covers of Nature and National Geographic – this plan shows how governments, businesses, non-profits, communities, and everyday citizens can all be part of a better food system.

This presentation can be tailored to a variety of influencer audiences or general public groups. It leverages Foley’s long and extensive expertise in this area, where he is an established global thought leader, author, and speaker.

Why Businesses Should Care About the Environment

Former Senator Gaylord Nelson once said, “The economy is a wholly owned subsidiary of the environment, not the other way around.” And he was right. For far too long, we have heard that we have to choose between jobs and the environment, or between having a healthy economy and a healthy planet. But that’s simply not true.

In fact, businesses and the larger economy need a healthy environment to thrive. Why? First of all, our economy depends on critical natural resources – clean water, healthy soil and farmland, growing forests, healthy fisheries, clean air, and abundant energy. But the economy also depends on less visible things that nature provides, called “ecosystem services” by scientists, including the pollination of our crops by insects, the cleaning of our water supplies by wetlands and healthy rivers, and the protection of our coastlines by coral reefs and mangroves. We would be nowhere without these free “services” from nature. Moreover, executives need to minimize the potential risks to their business – whether to their supply chains, their operations, their infrastructure and capital, or their distribution channels and customers – that may come from global environmental disruptions, including the impacts of climate change (more severe storms, more droughts and floods), sea level rise, depleted water supplies, widespread crop failures, and ecosystem decline. The “new normal” for business will be a time of managing these new risks.

In this presentation, Foley illustrates the importance of a healthy, stable environment to businesses and the larger economy. By uncovering the hidden economic value of nature – in terms of the natural resources, ecosystem services, and risk protection it provides – we can see ways to improve the long-term health of our businesses and our planet.

This presentation is ideal or influencer audiences, especially from the business community, and can be adapted to broader audiences as well.

In recent years, we have seen an unprecedented increase in the attacks on science and scientists by powerful politicians and media figures. While attacks on facts and science might sound trivial compared to the larger political and social upheaval happening in America today, make no mistake about it: Attacks on facts, science, and scientists will hurt you, whether you are a scientist or not.

In fact, the so-called “War on Science” is going to affect everything — ranging from the safety of the food we eat, the water we drink, and the air we breathe. It will affect the kinds of diseases we get and the medicines we use. It will dictate what our kids are taught in school, what is discussed in the news, and what is debated in Congress. It will affect the jobs we have, and what powers our economy.

Science touches everything we do, which is why the “War on Science” is so serious. This is a war that needs to be won, for the future of our nation and our children.

Foley showcases the current state of the “War on Science” and different paths we can all take to stand up science, so that science can stand up for Americans – and improve our long-term health, economy, and security.

This presentation can be tailored to many different audiences, and it leverages Foley’s extensive writing and speaking on this topic – including op-eds and essays in Scientific American and the San Francisco Chronicle, numerous media interviews, and speaking at the first National Science March in Washington, D.C. As world-class scientist and the leader of the one of the world’s premiere science museums, Foley is one of the most respected voices on this topic.