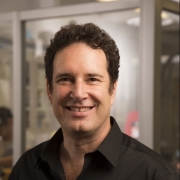 Hod Lipson is a roboticist and author who works in the areas of robotics and artificial intelligence. He and his students love designing and building robots that do what you’d least expect robots to do: Self replicate, self-reflect, ask questions, and even be creative.

An award-winning researcher, teacher, and author, Lipson enjoys sharing the beauty of robotics though his books, essays, public lectures, and radio and television appearances. ​Hod is a professor of Mechanical Engineering and Data Science at Columbia University, where he directs the Creative Machines Lab, which pioneers new ways to make machines that create, and machines that are creative.

Hod Lipson is a frequent keynoter in both industry and academic events. He speaks about artificial intelligence and robotics, and their implications across sectors ranging from retail to finance, and from art to architecture. Clients include Deloitte, Goldman Sachs, Moody, PWC, Google, Exxon, Baidu, Tencent, Citibank, Credit Swiss, Deutsche Telekom, and many others. He also speaks at non-profits such as TED, National Academies, ACM and others.

The Six Waves of Artificial Intelligence

Artificial Intelligence and Robotics technology have been making grand strides over the past few years, outperforming humans in tasks once thought to be impossible. Machines can now recognize images, interpret audio and understand language with unprecedented reliability. Cars can drive themselves. But where will this technology go next, and how far can it reach? We follow the field from its inception nearly a century ago, into its recent accelerating ascent, and into the future. We will see how companies are using AI today and what might be possible in the near and longer term future.

Driverless: Intelligent cars and the road ahead

In the year 2014, Google fired a shot heard all the way to Detroit.
Google’s newest driverless car had no steering wheel and no brakes. The message was clear: cars of the future will be born fully
autonomous, with no human driver needed. In the coming decade, self-driving cars will hit the streets, rearranging established industries and reshaping cities, giving us new choices in where we live and how we work and play. Hod Lipson offers insight into the risks and benefits of driverless cars and a lucid and engaging explanation of the enabling technology. The talk makes a compelling case for why government, industry, and consumers need to work together to make the development of driverless cars our society’s next “Apollo moment.”

“Human beings have dreams. Even dogs have dreams, but not you, you are just a machine. An imitation of life. Can a robot write a symphony? Can a robot turn a canvas into a beautiful masterpiece?” said Detective Del Spooner to robot, in “I, Robot” (2004) . Machines can create – but can machines be creative? Robots can recognize and imitate emotions, but will they ever feel emotions? Can machines be self aware? These once-philosophical questions are rising in portance as machines are gaining intelligence at an exponential rate. Join Hod Lipson as he shares the shares inside stories from past, present and future of machine sentience, and how we can prepare.