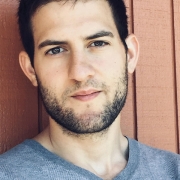 Aaron Frank is a researcher, writer, and consultant who has spent nearly a decade working in Silicon Valley. He was one of the earliest employees at Singularity University, a technology education and innovation center based in the San Francisco Bay Area, where he most recently served as Principal Faculty. As a writer, his articles have appeared in Vice, Wired UK, Forbes, Venturebeat, and Singularity Hub.

As a speaker, Aaron has lectured for audiences and organizations including The Coca- Cola Company, Under Armour, the CIA and Department of Defense, FC Barcelona, the NBA and many others. He routinely advises large companies, startups, and government organizations on trends related to a broad set of emerging technologies, with a focus on augmented and virtual reality.

Aaron began his work with Singularity University on the business side of the organization while it was a startup with fewer than 15 employees. He was a core part of the team responsible for the early stage growth of the company where he managed business development and strategic partnerships. Prior to joining SU, Aaron worked at a Washington DC-based life science consulting firm.

Aaron is also a founding board member of Community Carrot, a 501c3 non-profit organization with a mission of breaking the cycle of poverty for Washington D.C.’s opportunity youth, now also operating in Seattle Washington. With funding from the local D.C. government, the organization provides entrepreneurship training and access to capital for young adults who grow up in poverty.

Decoding the ‘Metaverse’ and Life Online: Toward a New Spatial Internet

Session Description: Facebook is becoming a ‘metaverse’ company. Epic Games announces a $1 Billion dollar fund to build the ‘metaverse’. The term ‘metaverse’ is seemingly everywhere these days, but what are we even talking about? In this session Aaron Frank will introduce audiences to the foundational concepts, technologies, and implications of what many are now referring to as ‘The metaverse’.
Core technologies integral to the discussion include spatial computing interfaces like augmented and virtual reality, game engines and graphics rendering, geospatial mapping infrastructure (also known as the AR Cloud), virtual world platforms, and decentralized systems built on blockchain, NFTS, and web3.
The Metaverse, synonymous with the idea of a ‘Spatial Web’, represents a radical shift in the way we spend time online. Soon, we will inhabit avatars inside 2D and 3D spaces where we’ll work, play, shop, and connect with friends online. Already, significant moments of arts and culture are taking place in these worlds. And central to the development of the metaverse is the evolution of robust new virtual economies. These changes promise to radically transform the relationship between brands and consumers and will force businesses to rethink their digital strategies online.
Aaron Frank has spent nearly a decade using and building virtual reality technologies while also researching, writing, and consulting on topics related to the development of augmented and virtual environments. His most recent clients in this space include Twitter, Coca-Cola, and Mclaren Automotive.

Spatial Computing and the Future of Remote Work

For several years, Aaron has been researching, using, and building virtual worlds for remote work, learning, and collaboration. Now as the world enters a new era of digital life in the landscape of Covid-19, organizations are discovering the need for better tools to connect. In this session learn about the role of spatial computing tools like augmented and virtual reality in connecting people across great distance. Develop an understanding of the currently available tools and how some organizations are currently using them. Identify which may be specifically useful for your business needs.

Living in Digital Worlds: The Planet-Spanning Impact of Social VR and the AR Cloud

Spatial computing technologies like virtual and augmented reality (AR/VR) have seen an impressive pace of development in recent years. Today, developers are building on virtual world concepts like Second Life by launching a new generation of fully immersive virtual worlds. These are major steps toward the future depicted in stories like Ready Player One. We’re also witnessing the early stages in the building of one of the most important assets in all of computing: the AR Cloud. Some analysts predict that in the next decade, the AR Cloud will be the most important and valuable piece of computing infrastructure in the world—more valuable than Google’s PageRank index or Facebook’s social graph. Development of the AR Cloud will empower developers, businesses, (and you) — to layer digital AR content on top of the “real” world. In this session, you will learn what the AR Cloud is, identify opportunities within social VR, and explore the ways that digital realities, both layered on our real world and captured inside fully immersive ones, will transform our relationship to the use of physical space and reshape how we live, shop, work, and play.

The Experience Machine: The Worlds of Augmented and Virtual Reality

Spatial computing technologies like augmented and virtual reality (AR/VR) have seen an impressive pace of development in recent years. Everything from training and development, manufacturing, education, and more will be upended by these new computing tools. In this session, participants will explore the way these platforms unlock human potential by leaving the world of 2D screens and moving computing into our three-dimensional lives. Understand the latest developments in the world of augmented and virtual reality hardware, the software applications that are most critically useful today, and the way these tools can impact and aid your business.

Understanding Exponentials: Innovation in a World of Rapidly Accelerating Change

Humanity has seen more development in science and technology in the last 40 years than the previous 4000. Within the last generation, we have discovered the role that ‘exponential growth’ plays in driving progress forward. We’re making unprecedented advances in computing technologies, communication infrastructures, artificial intelligence, biotechnologies and more. And tools that were only available to the wealthiest research labs are being democratized such that small teams the world over can now accomplish what only governments and corporations could do just 15 years ago. Understanding technology development growth curves will be the key to understanding innovative disruption for the next 5, 10, 20 and 100 years. Our understandings of the past are no longer sufficient to inform us about where we are headed as a species. Learn how exponential growth in technology plays one critical role in accelerating civilizational change.